Building Blocks for Impacting Your Grandchildren

Family Traditions and Activities for the Holidays 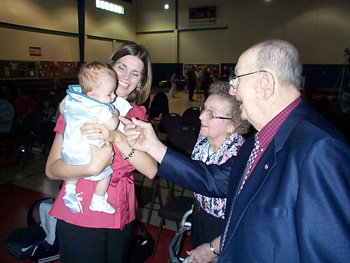 Raising children in today's world is a joy, a privilege, and a challenge! Parenting is perhaps the most important job you will ever have. When you became a parent, God gave you a most precious gift—a child of His to care for as His representative here on earth. Over the past sixty years there have been dramatic changes in families and our culture. In the 1960's there was a Judeo-Christian heritage that guided most families. Today we are moving toward godlessness or if not godlessness at least spiritualism without Christ. In the 1960's there was Biblical awareness. Today individuals, within and outside of the Church, are often Biblically ignorant. In the 60's there was friendship with neighbors. Today we are isolated from neighbors and many families are fractured. In the 60's schools, media, and government seemed to support religion. Today it often seems they oppose religion or at least Christianity. Only twenty-seven percent of American households fit the traditional model of decades past. In 1960 60% of families had a mother who stayed at home and a dad who worked. Today this represents 7% of the population. Today one of three households consists of a single parent with one or more children. 60% of children under 16 will experience their parents divorce. Children are having children: 1.3 million children live with teenage parents, and only half of them are married. Between 1971 and 1989, the number of teens in psychiatric hospitals rose from 6,500 to 200,000. And, the suicide rate of children and adolescents has tripled.

A recent Gallop Poll demonstrates some of the challenges facing Christians in equipping children, parents, and families to know, grow, and go for Christ. It showed that:

We must shield our children and families from false teachings of the culture and dangerous beliefs, reach out with the Gospel to those who do not know Christ, and equip Christians to serve and witness. We must help individuals recognize the spiritual battle they are in and encourage them to use the shield of faith! “Take up the full armor of God, that you may be able to resist in the evil day, and having done everything, to stand firm. And take up the shield of faith with which you will be able to extinguish all the flaming missiles of the evil one. And take the Helmet of salvation and the sword of the Spirit, which is the word of God (Eph. 6:10-18).

Building strong families takes prayer, an abundance of forgiveness, and reliance upon the Lord. It's a difficult task to raise children and grow healthy families in today's world! I thought it might be helpful to share research that has been gathered over the past twenty-five years that has shown six major qualities of strong families (Fantastic Families. Dr. Nick & Nancy Stinnett and Joe and Alice Beam. Howard Publishing Company, 1999 and Secrets of Strong Families. Nick Stinnet and John DeFrain. Little, Brown, and Company, 1985). These six traits include:

Remember that strong families are not without problems! Strong families have many difficulties! Their loved ones become seriously ill, there is unemployment, death of a loved one, car accidents, disasters, and every other problem known to man. But strong families press on in the midst of their challenges! Parents and grandparents model their faith, and persevere. And they grow in the process!

You and your congregation can equip individuals and families for the spiritual battle and learn to rely upon God's power, the Gospel, the forgiveness of Christ, the Word of God, His Weapons, and prayer! Do not be terrified; do not be discouraged, for the Lord your God will be with you wherever you go (Joshua 1:9). We have this treasure in jars of clay to show that this all-surpassing power is from God and not from us. We are hard pressed on every side, but not crushed; perplexed, but not in despair; persecuted, but not abandoned; struck down, but not destroyed (2 Corinthians 4:7-9).

We use cookies to ensure that we give you the best experience on our website. If you continue to use this site we will assume that you are happy with it.OkPrivacy policy